Spring is here! I can feel it and I can smell it, it is a fresh green kind of energy. Sparkling and joyful and bubbling, just like me. I love spring! We made a nice long walk, so M and P and I could take in this new energy that is all around us:

There are loads of flowers in the city where we live. Of course M had to make a picture of me against this background. So I posed for her, why not? As a bit of a celeb I am used to humans wanting to take pictures of me.

We had a great time. This is truly a beautiful city. 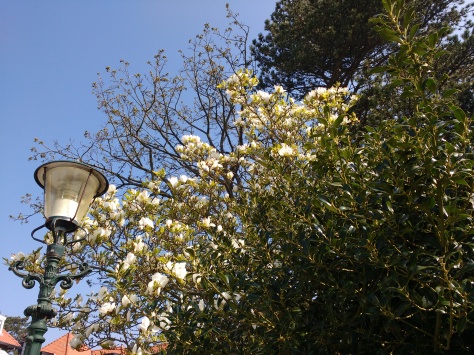 Humans look at the outside a lot. When they see a big dog, they assume it will be bold and brave. Little dogs they think are weak and therefore in need of caring. For us dogs this is not so. We do not look so much at the outside, but we feel and smell what is inside. The energy of a human or a dog tells us everything we need to know.

Some little dogs are very brave. Take this one, part of our pack of beach dogs. I mean the little one standing on the far right, the one with the crooked legs: 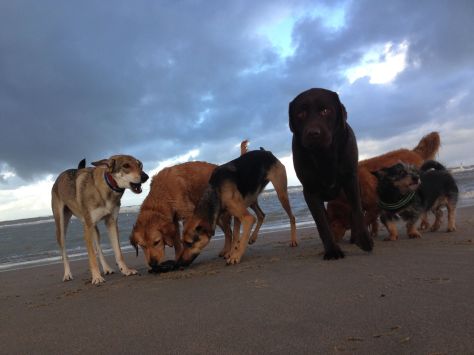 One would not tell by it’s looks, but this one is a leader amongst us, the Bandidos. Whenever we meet a new dog, some of us go out to sniff the new dog and then we make way for Koko. That is his name. Koko will determine whether the new dog is accepted as a temporary friend of our pack. If not, Koko will turn his back on the new one and we will chase the dog away. Koko is a rescue dog from Spain, a real fighter and afraid of nothing. You would’t tell that by his looks, right?

Some other dogs in our pack aren’t to be messed with either. Despite their small appearance, they are tough. Like these two.

Their looks do not tell you who they really are. I guess with humans this is the same. Humans have more means for decorating their outside (only take the amount of clothes they have! Astonishing!), but they can’t fool us. They can wear impressive clothes, but if they are unsure of themselves we feel it immediately.

I think dogs are not the only species with the ability to detect the true character of others, I think every specie can do this. Including humans. They also can feel the energy of another human or canine. They just have to open themselves to it. And practice on it, a lot, since they misled themselves for a long time by focusing too much on the outside.