We dogs are very versatile in our movements. We can run extremely fast, dig huge holes and we can jump high in the air, as my friend Jojo demonstrates in this picture:

This pic is a lucky shot by Nicoline, my personal trainer. She also made this pic, it shows how well we can stand on our hind legs. Another move we excel in: 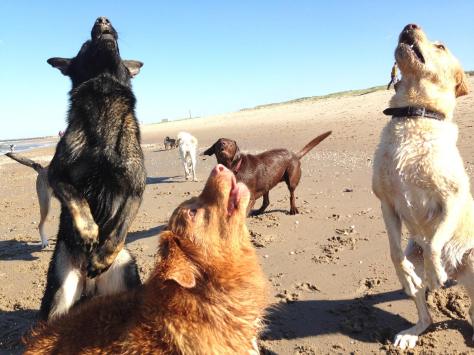 Yes we can do a lot of things, but some dogs overdo it. I mean one particular movement: bouncing.  All puppies bounce, that is normal. It is how we explore our strength and learn what our bodies are capable of. But when a dog has grown-up and he still bounces, that is not okay. At least, we dogs think so. Look at what happens when we play: when we are bounced upon, we snarl. And rightly so, because bouncing is very rude.

Oddly though, a lot of humans seem to accept that they are bounced upon. When their dogs are playing they tell each other: be careful, brace yourself for the impact! And they bend their legs, so they won’t fall when they are hit by their dog. That is a silly thing to do! Yes it is true that some dogs keep on bouncing when they are grown-up and some breeds even do it a lot, like boxers and bulls. But that doesn’t mean humans should accept being bounced upon! I mean: I don’t like begin run over by a 60 kilos bullmastiff. I don’t think humans like that either. They don’t need to, you know. My personal trainer for instance never gets bounced upon, because she is very clear she won’t accept it. Like the famous dog whisperer himself. I gather he doesn’t get bounced upon very often, too.

It is all about respect, really. We dogs do not accept it when another dog bumps into us and I think humans should act the same.